Even in Summer Heat, AZ Cows Are Happier Than You Think Heatwaves in Arizona hit the farms just like everywhere else. So how do 900 to 1,000-pound dairy cows feel when the outdoor temperatures climb into the triple digits? Do they produce less milk? Do they get overheated? Do the barns become saunas, with cows wrapping towels around themselves and laying back for a good, steamy sweat session?

These are legit questions.

Okay… except for that last one.

But when it comes to all-around cow comfort, the answers may surprise you. Even in the driest Arizona heat, dairy farmers put serious elbow grease into keeping thousands of cows cool, comfortable — and when it comes to milk, just as productive as the rest of the year.

From where they sleep to what they eat to the stations where they’re milked twice a day, it takes hard work and thoughtful preparation to keep dairy cows healthy and relaxed. And with the likes of solar panels, recycling, and natural feeding materials, farmers are raising the bar on eco-friendly methods… which keeps humans happy…

…And the milk moooooving.

With the first of June marking the start of National Dairy Month, (and the start of those rising temperatures), what better time to go behind the scenes on a small Arizona dairy farm with Arizona Milk Producers?

As you read along, check out the videos for some seriously happy (and cute) cows.

Casa Grande is a small town perched between Phoenix and Tucson, home to 55,000 people and some proud farming families. Average daily temperatures reach 105, 107, or as high as 122 in the summer months.

But none of this phases dairy farmers like Casey Dugan.

With a farm of several thousand dairy cows, he’s part of a family legacy that began in Wisconsin — one of five Dugans who have owned and operated dairy farms in the area.

“Here in Arizona,” he explains, “…it’s almost required to have fans for the cows. As soon as it gets over 85 degrees, we’ll turn the fans on. They oscillate back and forth with misters on them.”

He cools his cows in a ‘Saudi-style’ barn — a wide roof that offers plentiful, temperature-controlled shade and open access to the fields around it. When things heat up, the cows wander in, tails swishing. They drink water, soak up the fan and mist-cooled air, and stay until things cool off.

With Arizona and Saudi Arabia both sharing a hot, arid climate, it’s no wonder farmers use Saudi-style barns to offer shade and lower temperatures to their herds.

The open structure uses space efficiently, allowing farmers to recycle cow manure, used as bedding. Wet, cool manure from the shade is spread over the outdoor fields while dry, fluffy manure (about six to eight inches of it) is brought in for the cows to sleep on.

A comfortable place to sleep, and cool off means that dairy cows spend more time lying down, which increases blood flow to their mammary glands… which allows them to do what dairy cows do best.

You’ve probably heard that cows need to be milked.

Turns out, they love it.  And not just because it’s healthy, or hygienic, (which it is).

According to farmers, it relaxes them.

“The cows love to be milked,” Dugan explains, eyeing tubes, suction cups, and the legs of twenty-five cows, side by side. “They can’t wait for it. They get milked twice a day here. At some dairies, they get milked three times a day.”

With milking cycles that run as long as ten months (about 305 days on average) — and a single, healthy cow producing upward of 7.5 gallons per day — all the milk has to go somewhere.

In Dugan’s facility, the cows stand on rubber mats, rinsed off daily. Before being milked, they’re inspected for infections like mastitis. Their teats are dipped in orange iodine, a sanitizer that prevents bacteria from accumulating.

The soft suction cups that attach to a cow’s udders simulate the feeling of calves suckling.

While the milk comes out warm, (about 98 degrees), it’s cooled down to around 36 degrees for transportation, processing, and local delivery.

On hot and cold days alike, Duncan delivers around 8,000 gallons to tankers, sometimes twice a day. Watching twenty-five cows come and go at a time, he reflects on how important it is to keep his animals comfy, relaxed, and eager to be milked.

“Our cows are our future,” he said. “We need them to be healthy and strong. And it works out, if we take care of our cows, they take care of us.”

It’s a solid trade-off — good for cows and for those who stock refrigerators, drive delivery trucks, and contribute a ton to the regional economy.

And their chow is more than nutritional; it’s one part of an industry-wide move toward sustainability.

Everything’s grown locally — some of it on the farms themselves. And as Duncan points out, bringing the ingredients together for an optimal, satisfying diet saves mountains of stuff from going to the trash.

“It’s really important the cows have a balanced diet because it goes with how they produce milk,” he explains. “All these almond hulls would have ended up as waste in landfills, but it’s actually a good source of fiber for the cows that we’re able to utilize.”

His cows eat from a concrete trough that runs through the center of his Saudi barn. They produce manure, the same manure that’s spread outside to dry, then cycled back in.

As far as recycling goes, dairy cows are the original — in they’re spot on….

Beating More than the Heat

They’re the everyday standard, humane, ethical, and good for business.

And like famer Pat Dugan, President of Du-Brook Dairy, they’re doing it while reducing their environmental footprint. Dugan invested half a million in mounting solar panels across his farm, a project he finished back in 1998.

Across the Dugan family’s farms, heat, manure, and most importantly, water are recycled. It’s responsible practice for a scarce commodity, to both the Arizona desert and dry Saudi Arabia.

US Dairy.com details the commitments that the dairy industry as a whole has made to environmental sustainability.

At a glance, they’re lofty.

The industry aims to be carbon neutral by the year 2050. And if the Dugan farms on Arizona are a good barometer, they’re making strong progress:

“Thanks to increasingly modern and innovative dairy farming practices, the environmental impact of producing a gallon of milk in 2017 shrunk significantly, requiring 30% less water, 21% less land, and a 19% smaller carbon footprint than it did in 2007.”

So when school lets out and thermometers skyrocket, don’t worry about Arizona’s dairy cows.

From eating and sleeping to milking, cooling off, or just relaxing, they’re doing just fine.

For Arizona dairy farmers like Pat and Casey Dugan farmers — not to mention store managers, drivers, and those who care about the environment, (while loving their milk and dairy products)… cool, healthy cows are everything.

The stars of the show. Calcium: Bone Health Plus So Much More

Let’s talk about calcium! You’re likely familiar with the role of calcium and bone health: calcium is needed to build...

END_OF_DOCUMENT_TOKEN_TO_BE_REPLACED Sustainability. When I hear that word, many concepts may come to mind. From a negative perspective, I think of images...

END_OF_DOCUMENT_TOKEN_TO_BE_REPLACED 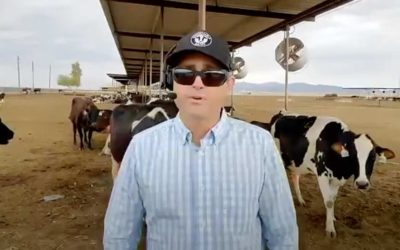 Celebrate National Nutrition Month and National Agriculture Week with a virtual farm tour! Do your patients and...