Becoming Leaders In Our Communities!

Reporting From the Field 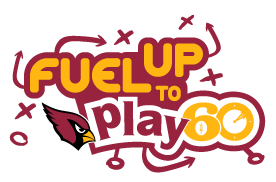 For the fifth year in a row I received the opportunity to go to the Fuel Up to Play 60 National Summit. Not only was this my fifth time attending, it was my second year attending as a Youth Council member. Every year during this trip I am able to learn more about others and create unforgettable memories. As always, while being on this trip we were able to create some unforgettable memories and live unforgettable experiences, but I think the one that really stood out to me this year and made an inspiring impact on my life were our service sites.
Service sites were something new that we tried this year, we were spread out through the city of Ohio in 10 different groups, each group was sent to a different school who was serving lunch to kids of the community through the summer.  While at those schools we ran a mini flag football game hosted by one of their very own Cleveland Brown players, and we also did a poster competition — the winning team would have their poster produced and shared through the community.
While being in these communities I was really able to see that some of us take things for granted and don’t really appreciate what we have. We may think that we don’t have everything in the world, but there are some kids that are going through things that we don’t even realize and don’t complain while we are complaining about not getting something that may be materialistic. For example, at my service site while eating lunch I sat with some of the kids and talked to them for a little, and through the activities I helped them out, if they had any questions or if they needed help executing their idea. But at the end of our event we had a little girl that was super upset and was crying because she did not win any of the prizes, they took her to the office to try and calm her down. But I had an extra lunch bag that I could give her so I decided to quickly go to the office before we left to see if I could catch her and try to cheer her up. But as I walked in she was still very upset and I handed her the lunch bag and she began to cry even more and I told her, its okay there will be more chances for you to win but in the meantime you can put your snacks here and bring them to school. She responded but I don’t have food at home, I get my food from school.
At that point my eyes teared up and realized that there are bigger problems in this world that we don’t even acknowledge. Which is why I am grateful to be apart of Fuel Up to Play 60 because they really know how to reach out to students in different communities and try to help, even in the smallest way possible. They aren’t just motivating us to be leaders in schools but also in our communities. Thank you.
Atziry P.